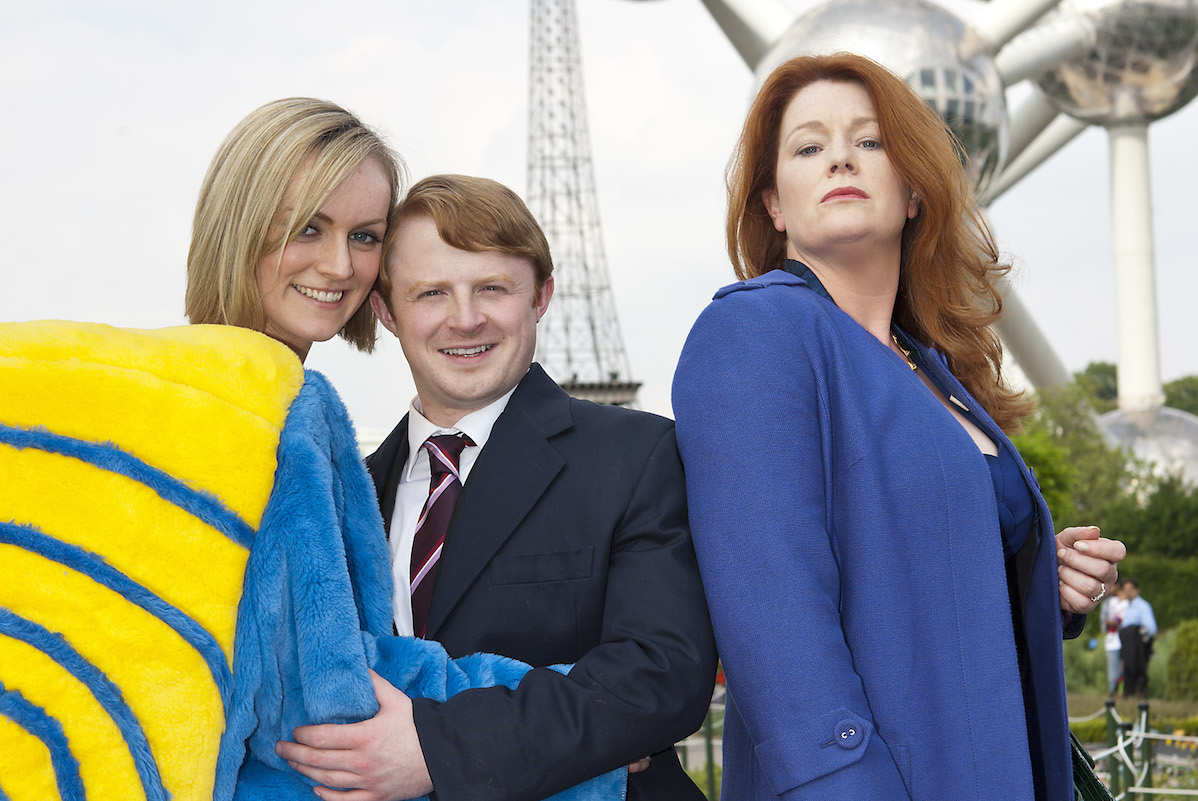 Maeve Kelly Clarke is cut from blue-chip, Irish political stock. Her father, her hero, was a TD and she’s on her way to represent Ireland in Brussels. Maeve inherited Daddy’s political ambition, ruthlessness and cunning and she’s going to need all of it when she lands in EU Headquarters.

With an eccentric and increasingly luckless team surrounding her, Maeve’s determination to prove herself to her European colleagues, as well as her Irish detractors, suffers repeated setbacks. Low-cost Irish airline, Doyleair, prove to be very high-stress. Maeve is made to suffer for an Irish artist’s lefty political tantrums. Belligerent German pensioners, a nosy documentary crew and a Eurovision-loving Irish Taoiseach all threaten to derail Maeve’s Euro’ experiment.

And if that isn’t enough, Maeve’s Chef De Cabinet, Ciaran MacIonraic, brings his own unique brand of chaos and disorder.

But Maeve Kelly Clarke didn’t get where she is today for no reason. Like her father, Maeve’s a fighter and if anyone’s going to be honorary mother to 500million Europeans, it’s this unique Irish woman.

Former Minister for Transport, Maeve Kelly Clarke, is Brussels bound as a new Commissioner. Maeve is determined to prove herself as a politico, not just to the Europeans but to the sceptics back home too. But Doyleair – the low cost, high-stress airline – loses a beloved family heirloom and Europe immediately hands the new Irish representative an unwelcome responsibility.

Intent on showing the Europeans some post IMF, Hibernian competence, Maeve puts her best foot forward. She assembles a multinational, if unlucky, team. Surely Maeve can get through her inaugural press conference without another Doyleair-related disaster?

Lefty politics and public art are a bitter mix for European Commissioner Maeve Kelly Clarke as she suffers the surprise arrival of some familiar Irish faces in Brussels. Maeve is aggravated most to see self-appointed Arts angel, Minister Caoimhe Ní Chuinn, in Belgium.

Some highly unconventional EU manoeuvrings are required by Maeve and her team if their mini Euro-experiment is to avoid being derailed.

Commissioner Maeve Kelly Clarke is hosting a dinner for EU President Van De Veld. The Commissioner is going to prove that the Irish contingent in Brussels is a stable, austere, well-oiled machine. But Maeve’s notably austere daughter pays a surprise visit, while a less than stable UKIP representative picks Maeve’s meal to introduce one of his country’s pork delicacies.

Maeve is in danger of poisoning relations with the EU President before desert is even served.

A documentary crew is shooting in the EU Department of Culture, Heritage and Multilingualism (and Climate Action). Commissioner Clarke is convinced that the film will highlight her crucial role as ‘mother’ to the European family and it will highlight the power and influence of her office.

What harm can a visiting German pensioner cause? If that pensioner is an anarchist, Stasi-inspired protestor, it’s a lot more harm than even Maeve’s team is used to.

The Irish media are reporting that politician, Maeve Kelly Clarke, has been buried in Brussels. To stop the rot and raise her profile, Maeve decides to bring the Eurovision Song Contest back to its spiritual home of Waterloo.

But the Irish Taoiseach himself arrives at the EU Commission for tense talks about the Eurovision. A high stakes power-battle is on.

A key European Commissioner is critically unwell. Maeve volunteers to pick up the extra workload. All roads maybe lead to a big promotion for Maeve and her Chef De Cabinet, Ciaran MacIonraic. But a lingering resentment turns into a full-blown battle and Ciaran pushes Brussels to the verge of total chaos.

Just as it appears that Maeve is about to become a vital cog in the EU mechanism, Ciaran is his boss’ potential Achilles Heel. Is Maeve Kelly Clarke about to be decommissioned?

Funny … hits it targets head on.

The best comedy on Irish television at the moment.