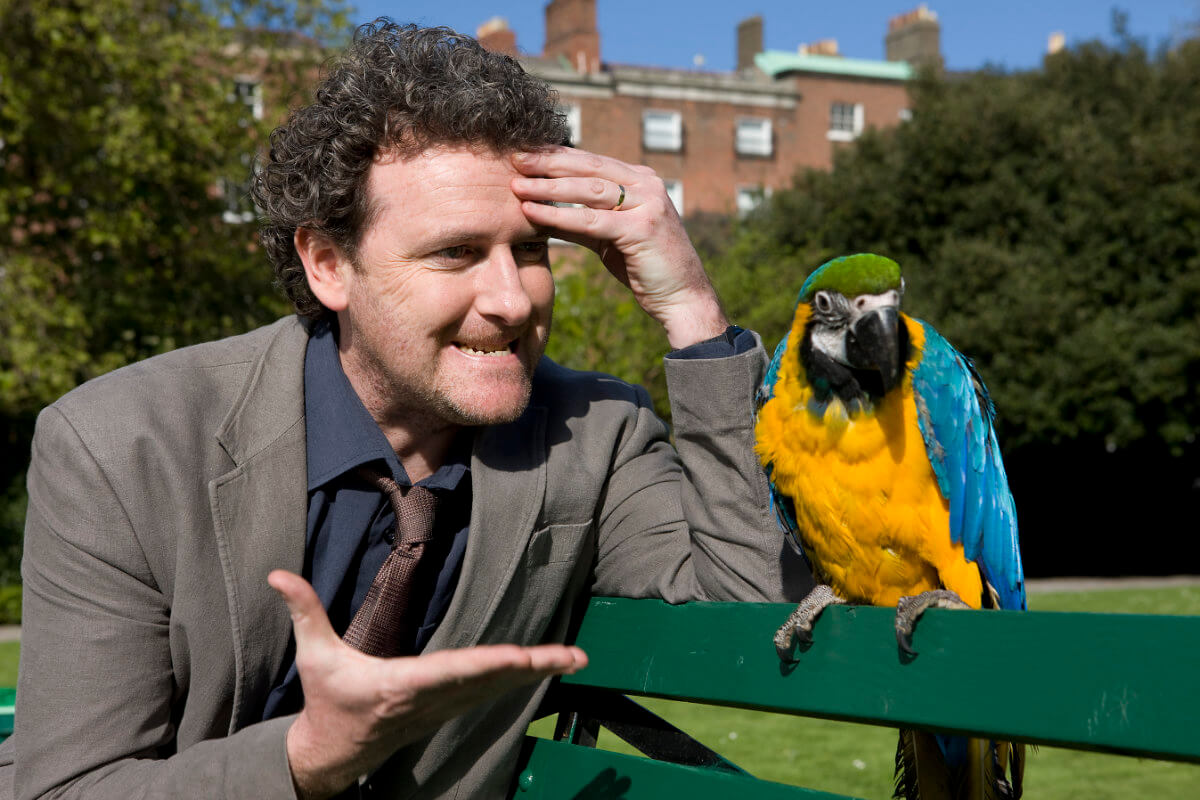 An Crisis – A Six part comedy-drama series for TG4

For the past ten years Setanta de Paor has been acting director of an obscure Irish language organisation called ACT (An Chomhairle Teanga). Setanta is a mild mannered man who has always believed in the path of least resistance. A conciliator par excellence who has got where he is by keeping his head down.

But now, in the downturn, ACT has come under scrutiny and threat of closure. The appointment of a new minister who went to school with Setanta and always disliked him makes matters worse. Setanta and his team push the various projects they’ve been funding into the spotlight in an effort to justify their existence. The projects range from intense young filmmakers to passionate promoters of the Ulster Scots language and culture to very unorthodox GAA stars and volatile sean-nós singers.

And if that was not enough, the temperature gets turned up when Setanta inherits a parrot reputed to be able to recite every word of the famous, but unread, Irish novel “Cré na Cille”

Throughout it all, Setanta struggles manfully to hold it all together helped, and more often hindered, by his staff and the cultural sacred cows they have chosen to fund.

An Crisis is upon us and nobody’s job is safe. ACT, An Comhairle Teanga, guardian of An Gaeilge, producer of the first Irish-language slasher film, is for the chop. For ten years Setanta De Paor has been acting director of ACT. But that’s all about to change, as an immovable object, in an Irish-language funding body, meets an unstoppable force, in government cutbacks.

And Setanta’s not the only employee in ACT resisting the blunt charms of Caoimhe, the minister’s hit-woman. Nobody is quite sure what he actually does, but Muiris has been working on his crossword in the offices of ACT for probably twenty years now, with no intention of going anywhere. Receptionist Aoife is in the job of her dreams. Where else would a recovering Riverdancer go to convalesce and make some money? They say the first cut is the deepest. Maybe out in the real world but not in Irish-language promotion. And certainly not in Irish-language serial killer films.

Branded a lunatic asylum, a bunch of morons or just plain ‘bonkers’, depending on the day of the week, Irish language torch-bearer, ACT, is fighting to justify its’ continued existence in the greatest economic downturn since the foundation of this state. The Minister wants to see it gone, not least because of a healthy hatred he nurtures for acting boss of ACT, Setanta De Paor.

ACT is hosting The Board of Ulster Scots in a special meeting to discuss cross-border, multilingual initiatives. What better way to prove the relevance of ACT, ‘vis-à-vis’ ‘going forward’ and ‘not playing the blame game’? That is, of course, were Ulster Scots a language not simply a dialect. With ACT’s firebrand financial controller, Ciaran, locked in a bitter row with his Northern counterparts, and with a hard-won peace agreement between the North and the South threatening to spectacularly unravel, Setanta races to resolve a potentially disastrous new conflict.

“It’s your language. Use it. I’m Diarmuid Darcy”. Diarmuid Darcy, GAA star, role model, celebrity face of ACT, pumped up on narcotics and about to land Setanta and the rest of An Comhairle Teanga’s employees in serious trouble. A group of schoolchildren converge on the offices of ACT, to meet their Croke Park hero, but it’s not just the Artane Boys’ Band that is ringing in Diarmuid’s ears. It’s the call of cocaine and the ecstasy of hashish.

After several weeks observing Setanta and his eccentric colleagues, government watchdog Caoimhe is no clearer as to what it is this organization does. Or what it is that employees like Muiris, with his crossword and his biscuits, and Emer, with her newborn baby and her cellphone earpiece, actually contribute from nine to five. But it’s the quiet ones like Muiris that you always have to look out for, as Caoimhe is so elegantly reminded just as she’s threatens to put an end to Diarmuid’s antics.

When Sean Nos singer Peigí Ní Mhainín opens her mouth the music just flows out. Peigi sings of starvation and emigration and the Irish peasant struggle and ACT has financed her trips abroad to music festivals and concert performances, to the tune of many thousands of euros. Tax-payers money well-spent, everyone in ACT agrees, until Peigi’s extra-curricular hobby is unearthed. The lady whose music comes from ‘The Well’, has an international property portfolio to rival any recent Irish tycoon. With an impending record launch for Peigí, in ACT’S offices, Setanta De Paor and his right-hand woman Emer try to convince Peigí of the need for some humility.

Government spending is being slashed and ACT’S future is in doubt. Setanta needs Peigí to be truer to her real Irishness. But foulmouthed Peigí is nobody’s fool and when government watchdog Caoimhe attempts to unmask the truth behind all that Sean Nos, Peigí has her own ammunition that she’s ready to fire.

Controversial writer Piaras De Barra has fuelled the anger of Irish culture enthusiasts everywhere with his narrow-minded commentary on modern society. Piaras laments the loss of the Christian purity that defined this country and its’ population until the most recent boom and he’s now dancing on the grave of the Celtic Tiger. He’s recommending closer ties to Islam and its’ policies on single mothers, homosexuality and eugenics. Needless to say, ACT isn’t short of staff willing to take on Piaras on live radio.

In true ACT style however, a series of unfortunate events lead to Piaras being pitted against receptionist, former Riverdancer and guru of alternative lifestyles, Aoife. She may not know much about tribalism and history, but Aoife has a ready remedy for any childhood trauma. Just what she reckons Piaras might actually need. With government observer Caoimhe ready to file her report on the future of ACT, Setanta is praying for a civilized and intelligent example of this organization at its’ best. It’s a hope that Aoife may well and truly kick into touch.

“A parrot and a baby and toys and people who do nothing”. This is the government’s final, toxic report on what actually happens in ACT and the Minister needs no further incentive to close down this asylum. Setanta, Emer, Muiris and Aoife face ‘Siberia’. Or worse still, in Ciaran’s case, a translating job in Brussels. But Setanta isn’t going without a fight. It’s time to whip ACT and its’ employees into shape and as much as the staff hate regime change, which includes turning up to work on time, taking only an hour for lunch and not bringing newborn babies to the office, a glimmer of hope appears in the darkness.

On an impromptu visit to the ACT offices, the Minister finds an efficient semi-state agency. Nothing of the sort that watch-dog Caoimhe had reported witnessing. And with the finish line in sight, it appears that Setanta might have just scraped it. They say you should never work with children or animals. Unless it’s a parrot, of course, that can recite Irish language classic, Cré na Cille.

Clever stuff (…) struck its tone right from the start.

Laugh out loud funny- interspersed with a couple of knowing sniggers.